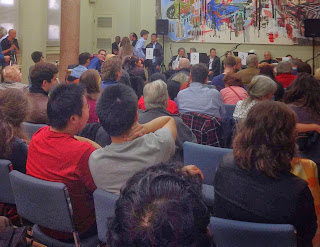 Paying a visit to ROGERS TV

In the past there were occasions that one or more candidates did not show for the Rogers TV live debates in the studio, and other candidates filled the absentees’ seats, if they were present. Hence, last night Mr. Dorian Baxter and I, both candidates in the Toronto – Centre riding, went to ROGERS TV, just in case such an opportunity should arise. However, I was very disappointed that we were left standing in front of a glass door and Ms. Wong passed by without acknowledging us or opening the door to find out why we were there.

First there was one security guard on the other side of the locked glass door talking on the phone, ignoring our hand gestures to open the door, and then another security guard joined him and both ignored our presence – Mr. Baxter, myself and a friend of mine who was doing me a favour by being my ride. Mr. Baxter tried to call Ms. Wong, but no answer.

After a while a young fellow arrived and he was not allowed in either at the beginning, until a young lady from inside told the security guards to let him in. When the door opened, Mr. Baxter asked one of the guards to call Ms. Wong to ask about the possibility of watching the show, since it seemed that all four candidates from the mainstream parties had shown up, and there was no vacant debater seat.
The security guard explained that he had been told not to let us in because we were not supposed to be there.

There were certain flaws in the whole situation: First of all, no one told us that we were not allowed to be there in the first place. Secondly, no one in charge, producer or otherwise, came to the door to ask us why we were there. Thirdly, they kept us, three mature quiet, well mannered, well-dressed individuals, two of whom were known by the producer, outside of the glass door, treating us like criminals, as a disease at the least!

After experiencing this lack or regard and complete disrespect from the ROGERS TV staff, I was wondering why. Why did they ignore us? Why didn’t they ask us our reason for being there? Why did they bring two security guards to the other side of a locked door? What were they thinking? Were they afraid of us? If they were, why?

I believe the perverse attitude of excluding candidates outside of the mainstream party has driven ROGERS TV staff into melancholy! I can claim with confidence, that Ms. Wong and her colleague were imagining the worst case scenario, maybe an act to promote anarchy, and did not want to let three old men cause a riot! I guess these people in Rogers TV watch too many movies themselves!

It does not hurt to politely open the door to your visitors and ask why they are there, and if you do not like their presence, politely say, “No.” After all, at least a dozen people were witnesses: the two security guards along with all of the people looking at us through a locked thick clear glass door, like we were from another planet.

My advice to the management of Rogers TV and their staff is to get off your high horses and face reality.  And please do not flatter yourselves: you are not worthy enough for three intelligent men to waste their energy interrupting your programming. All we wanted was decency.

After all Mr. Baxter and I were there only to fill an empty chair, if it became available. Shame on you ROGERS TV! Shame!
Posted by Voters Echo at 07:48 No comments:

Shouldn't it be "Some Candidates Debate."

I don’t know about other districts, but the democratic process in the riding of Toronto-Centre has been high jacked by some of the organizations who organize debates for the candidates. Ironically they still call it an "All Candidates Debate."
I am running as an independent candidate in Toronto Centre. I don’t receive invitations to debates. When I attempt to contact the organizers and request that I be included, they often don’t respond to my first call, message, or e-mail. When I am finally able to connect with them, they reject my attendance – offering whatever excuses they can muster.
When I complain about their unfair process, they treat me like a charity. They suggest that I be permitted to distribute my campaign pamphlets before or after their session. These organizers:
- deprive the candidates; and
- do injustice to the electorate by limiting their choices to the candidates from the mainstream Parties.
In the last two days my request to participate in an all candidates debate has been refused by Mr. Jim Purdie of the Fair Vote Toronto Chapter, and Doug Fisher of the Cabbagetown BIA. I have left messages for TV and radio stations, and received no answer.
An Independent Candidate has enough challenges from: finding an official agent and auditor, and collecting signatures. This is all done with extremely limited resources for promotion.
In my opinion any organizer of all candidates debate who fails to send an invitation to all of the official candidates in their riding, is in violation of the spirit of the democratic voting process, under the Election Act. A gathering of the friends of the mainstream Parties, should be treated as a private meeting, and not as an "All Candidates Meeting" in a Federal Election.
Posted by Voters Echo at 09:15 No comments: